Connect Group is a classic GoodCo/BadCo. The GoodCo in this case is Smiths News, the UK’s leading wholesale newspaper business. While the business is in long-term decline, it still generates a steady, capital light, £40m in annual pre-tax free cash flow. Smiths smaller, lower margin peer, was acquired by a Private Equity firm in 2018 for 5X EBIT, providing a good yardstick for which to value it.

The BadCo is Tuffnells. Tuffnells is one of the UK’s largest “odd shape” parcel delivery companies which was acquired by Connect in late 2014 for ~£100m. Today, it would be lucky to fetch £10m. While it used to be a decent company, Connect’s former management team, in all their wisdom, tried to combine the asset light operations of Smiths with the CAPEX heavy Tuffnell’s and it was a complete disaster. The only saving grace is Tuffnell’s Real Estate portfolio which the new management team is currently monetising. Through sale & leaseback transactions, it looks plausible the company could release ~£30m (£15m achieved so far). Importantly, the ParentCo only has to guarantee these leases for 1 year, after that, the lease liability sits within the Tuffnells subsidiary and is therefore, ringfenced.

Sum-of-the-parts ideas are typically a fertile hunting ground for “value traps.” However, in this case, the share register is dominated by active investors. Most notably Aberforth Partners with 15% and Munich based family office, FORUM, with a 12% stake. I believe these factors skew the range of potential outcomes towards the positive side as they are unlikely to remain supportive of a strategy that destroys shareholder value. They likely played a role in the ousting of the latest CEO and the recent initiation of a strategic review.

In my base case scenario, I assume Tuffnell’s can be sold for £1 (not a typo), and Smiths News is worth 5X EBIT, which gets a valuation of ~60p per share (100% upside) (assuming some of the funds from the recent sale & leaseback are put towards reducing the debt). In a bear case, where Tuffnell’s remains within the group (unlikely given the shareholders involved) the overall EBIT would likely be around £28m as it loses ~£1m per month. On a 5X multiple this gives a value of ~30p. Therefore, the risk/reward setup looks to be asymmetric and extremely favourable, especially when one considers further upside from sale & leaseback transactions, monetisation of the overcapitalised pension fund and a potential sale of Smiths News too. In a bull case, it doesn’t take herculean assumptions to get a valuation in excess of 80p or nearly 200% upside.

The key swing factors that will determine whether this investment is profitable or not are:

Therefore, I construct the following Decision Tree to create the reasonable bounds of potential outcomes:

Even assuming a very conservative 50% chance that Smiths News operations get worse (it has had extremely consistent profits for 15+ years), the probability of losing money still seems unlikely with a conditional probability of only 10% (50% x 20%).

Putting the valuations and probabilities together, I get the following expected value:

Therefore, given the range of potential outcomes, I calculate an expected value of 42p – providing for an expected return of 40% if one was able to run this bet multiple times.

The Board plan to make a decision regarding Tuffnell’s future within the next 6 months, and given the shareholder base, if they fail to come to a conclusion, I don’t think they will retain their jobs. Therefore, this investment should have a relatively short duration of 1-2 years, providing very attractive annualised expected returns.

At current prices, there is also a large cushion providing room for a deterioration in operations at Smiths News. The following matrix shows the return potential at various levels of EBIT and multiple, with the assumption that Tuffnell’s is sold for £1:

As the matrix shows, as long as the core business is worth at least 4X (in-line with the recent peer transaction) the outcome from this investment should prove very favourable. The only outcome which results in a loss is in the event the core Smiths News operating profits decline ~25% and the exit multiple is 4X.

Smiths News is the UK’s largest newspaper and magazine wholesaler, with roughly 55% market. Every morning they facilitate over 27,000 deliveries, before 9am. They pick, pack and consolidate supplies from over 3,000 printed titles, as well as process returns and recycling of unsold copies from 39 depots across the UK.

The business model is capital light, wherein they only operate the distribution centres and the drivers are independent contractors with their own vehicles. This has been of crucial importance given the structural decline in the industry as it allows them to more easily reduce capacity.

Smiths and Menzies operate geographical monopolies and barriers to entry are almost insurmountable. They stagger contract renewals (which average 5 years in duration) so that in any year, only a fraction of the total market is up for grabs. Therefore, a competitor would have to suffer substantial losses while they slowly acquire market share, only to end up in a declining industry! Competition is not a risk in this industry.

It would also be difficult to convince the publishers to switch, as they need to have a lot of faith in the distributors as a going concern due to the enormous debts they have with them due to the long payment terms. Therefore, a competitor, which would initially be losing money due to lack of route density, would have to convince the publishers that they will remain in business long enough to pay them back for the inventories. Doesn’t seem likely.

The current MD of Smiths News, Jon Bunting, has been with the Group since 1994 and has done a tremendous job in offsetting the declining revenues through cutting costs. It requires some assumptions to be made on gross profit margins, but since 2013 it looks like he has managed to reduce operating expenses by ~£40m or £6.5m per annum. This gives more credibility to their currently budget £5m in annual OPEX reductions to maintain current profits:

Jon was recently rewarded for his efforts through being promoted to interim Group CEO.

As expected, the overall industry (measured by circulation) is in a steady, long term decline. The following chart is based on circulation data for the 12 largest publishers over the last 19 years (including the now defunct “The Independent”)

The average rolling CAGR is around -6% but there are quite large differences between different papers. For instance, the Evening Standard and The Times are roughly flat on where they were 3 years ago.

The next chart compares Smiths News revenues, with overall circulation, rebased to 2010: 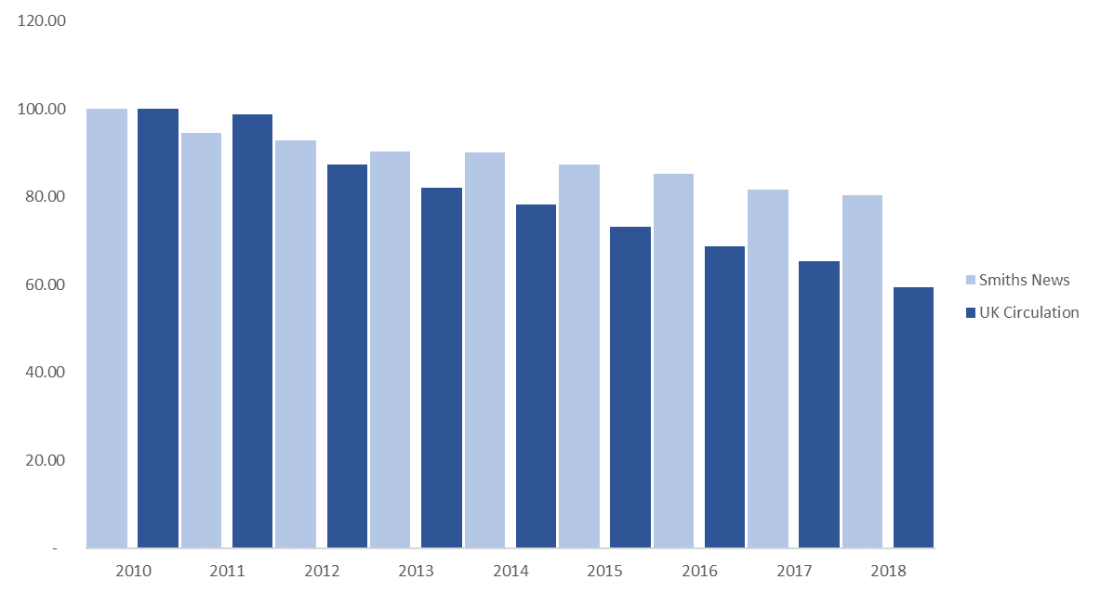 This chart essentially highlights the price increases, with circulation declining at 6% p.a. over the period, and revenues declining at 3% p.a.

Why is it mispriced?

Smiths News is not a compounder. It has a commanding position in a dying industry. However, for this investment to work, it does not require herculean assumptions. As long as Smiths News is worth more than 3X EBIT and it can maintain relatively steady profits, this investment should generate attractive returns. Given a near exact peer was acquired in 2018 for 5X EBIT, I think it’s safe to assume this is the going rate.

At current prices, if Tuffnells is removed, and the company returns to its former high pay-out-ratio policy, the stock would likely be providing a dividend yield in excess of 30%. The guy who’s been in this business for 25 years is confident they can at least maintain current profits for the next three years. Therefore, whatever happens after that is the cherry on top, because we would have recovered our entire investment by then!

Is it really worth 5X EBIT?

Before I found out that Menzies had been acquired in 2018 for 5X EBIT, I had already come to the conclusion it would likely be worth 4-6X based on the following DCF assumptions: 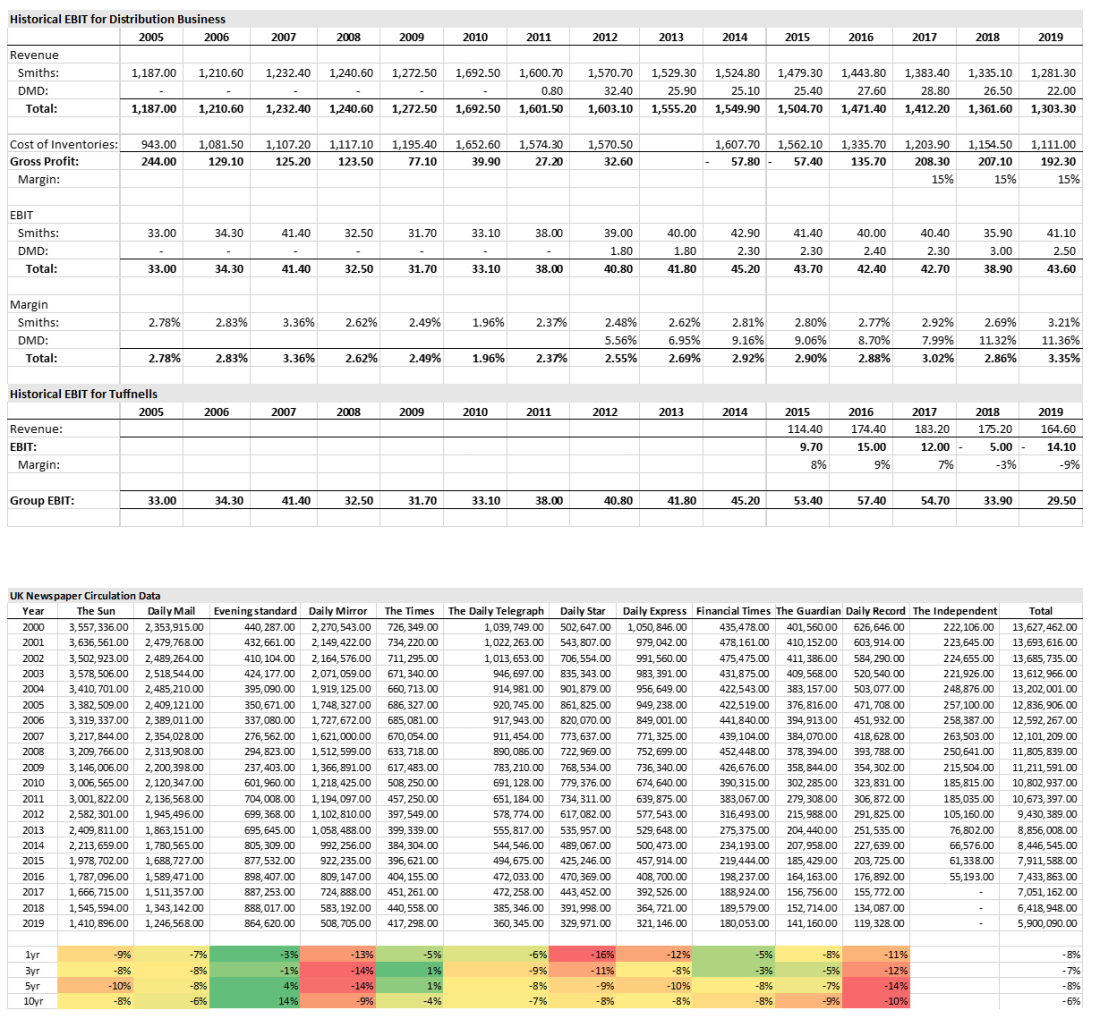